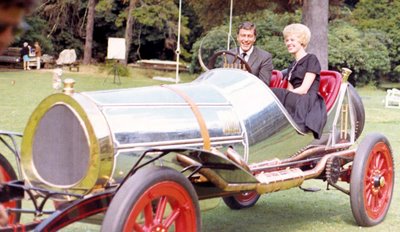 I don’t know why the film Chitty Chitty Bang Bang is so popular with children. The centrepiece of the movie occurs in the state of Vulgaria, where children are reduced to the status of vermin, scavenging for food in various dank and dirty cellars. Those who manage to escape into open country are ruthlessly snared by an astonishingly evil and big-nosed child catcher, who exhibits them in his cage for the paedophobic Baroness to inspect. All the toys manufactured in the land are for the exclusive use of the Baron, who in spite of being many years older than his wife is himself an overgrown child. Yet the attractive Baroness dotes on her husband, remaining loyally by his side even after he has been deposed. What possible pleasure could a child derive from such a grim and unnatural setting?

The children are rescued from their plight by a pitchfork rebellion instigated by Caractacus Potts, a widower whose own offspring are imprisoned in the Baron’s castle. I question whether this is the right message for the children of today. Violent revolutions have a poor track-record in human history, often fomenting a reign of terror in which the masses reminisce nostalgically about the ancien régime. As the children’s ideological mentor, one might have expected Mr Potts, an Englishman, to advocate a more measured approach. The Baron, perhaps, could have been forced to sign a Magna Carta and accept a new position as a constitutional head of state. And storming the castle on the Baron’s birthday was a mean-spirited decision, more befitting embittered proletarians than fun-loving children.

Yet Caractacus Potts reveals himself as a man of exemplary character when his children demand that he weds Truly Scrumptious. Being a gentleman of the old school, Mr Potts is deeply embarrassed, even though Miss Scrumptious is evidently charmed by the idea. He observes that a union between a penniless inventor such as he and a wealthy heiress such as she would be unthinkable. Nowadays, many would deride Mr Potts’ behaviour as a load of snobbish nonsense, but a gorilla understands the importance of hierarchy in mating decisions. A certain degree of reticence in such matters helps to preserve a climate in which the raffish adventurer is discouraged from soliciting the affection (and possibly infiltrating the petticoat) of the well-bred maiden. The removal of all inhibitions in such matters has done little for the moral health of the human species, which is now infested with scheming gold-diggers at every street corner.

Mr Potts is ready to propose marriage only when he discovers that he too has acquired a fortune as a result of one of his inventions. In his excitement, he rushes to inform Miss Scrumptious of his new-found wealth and kisses her on the lips.

“Well, Mr Potts, now you really will have to marry me!” exclaims the startled Miss Scrumptious.

Although they laugh at this humorous conceit, it is an apt note on which to end the film. Children should learn that a kiss is not purely a sensual embrace and may often lead to more significant things. This is not to say that a gentleman should always marry the first woman he kisses – that would certainly be going too far. But I think it is correct to say that a gentleman should never kiss a woman on the lips unless he is open to the possibility of marrying her. It is subtle points of etiquette like this that preserve humanity from chaos of the bacchanal orgy.

Comments:
GB - as always, an inspiration! I wrote about you on my blog to-day and would like your feedback on just how you do it!

"a gentleman should never kiss a woman on the lips unless he is open to the possibility of marrying her".

You should have added "except when he is drunk". You know, GB, when I first read that statement I thought "bollocks". But on reflection, there is much in what you say. I quite fancied the Baroness. Wasn't she in the 'Carry On' films?

What about that bit in the Director's Cut where he knobs her from behind over the bonnet of the car? What's the etiquette for that, then?

It was called Bang Bang for a reason, you know.

"This is not to say that a gentleman should always marry the first woman he kisses – that would certainly be going too far."
Ya hear that Oedipus. Golly GB, all manner of problems could have been solved had you been about earlier.

I was going to say which lips but that would be vulgar and, worse, obvious. So I won't.

You humans are obsessed with sex. If you ask me, you all need to get laid.

Her name is Anna Quayle, Tarzan. She's 70 this year, so you'll have to hurry up if you want to woo her. Apparently not in any Carry On film, but she did appear in A Hard Day's Night.

...that cute blonde haired boy grew up to become a drama teacher at a secondary school in the town I grew up in... He wasn't my teacher, but by all accounts he was a miserable ol' cunt!

Binty, I heard the even cuter blonde-haired girl went on to become some kind of political agitator. That's what happens when you allow children to rebel against a Baron. I think we should make it clear that we are using the word 'cute' in the Anglo-Scottish sense (as in "what a cute little doggie") rather than the American sense. As a school teacher, you don't want to be misinterpreted. Anyway, here is a picture of the kiddies for those who are interested.

For once, I completely agree with you. But I carry it further! In the eyes of God, any woman you kiss on the lips (excepting those of immediate blood relations to yourself) is automatically married to you.

Only by setting forth this high example can the sanctity of marriage be preserved in this godless culture.

The part I find unthinkable is the Chu chi scene. Sure this ruler could be bothered by his Baroness constantly being there, by all of her attention and even by her caressing and compliments etc, but to see her in her bedroom during the Chu-Chi scene dressed in a corset presenting herself in sexy clothing, diamonds, braids, garters, and wonderful body; you'd think his mind would turn towards her if even only for the evening. Instead he tries to kill her over and over as she tries to turn him on...

This is for kids??
what the hell was this all doing in a "kids" movie. This murderous Baron trying to off his wife every chance he got for not apparent reason. A loving and attractive wife who seems to put up with it What did that teach the kids??

...Oh btw for that guy who likes Anna Quayle above...go to Yahoo groups and type in Anna Quayle ,,there is a fan site for her...

Anonymous, I think the purpose of that scene is to show that the Baron is a pre-pubescent brat in his behaviour. Hence there is no sympathy for him when he is deposed. The mystery is why the Baroness is so fond of him. I always think of it as the "choochy-face" scene.

Sure he was a child ruling a kingdom err Barondom??

But man was his wife hot...and to think I'm saying that about a charater in a childrens movie...

The point is that little children don't like her and think she's silly and nasty. I know because I've watched the film with my kids. I think it's a case of one role for the kids and another role for the Dads.

Yes killing her would have been a complete waste...

and yes the kids don't like her but why play it up so much in a kids movie..you know the sexual nature, her flirting with him, her corset etc very adult ...certainly a scene I'll always remember from the film!!!

Personally I would have been all over the Baroness ..It think that's what she was looking for the night before his birthday...certainly not what she was getting

I never understood the Chu chi number for a kids movie. An attractive wife in lingerie coming on to her husband all the while he tries to kill her? Why is this in a kids movie, and since it was, why would he want she a hottie dead? Maybe it's because the whole thing is rather James Bond like?

Anyways she was quite something,