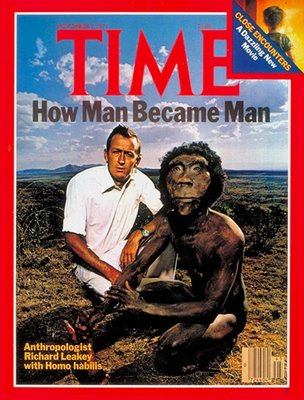 One of the hazards of living in Africa is having an anthropologist dig up your back garden. I once saw Richard Leakey pottering about with a trowel, collecting bone fragments and gassing away to his minions as if he knew what he was talking about. When he saw me, he made his salaams and invited me into his tent to discuss his latest theory on “the ascent of man”.

I listened patiently to the eminent earth-digger expound his thesis with much arm-waving, his Adam’s apple bobbing up and down like a cork in water. The gist of his argument was that walking upright gave early humans the confidence and poise to carry weapons and scavenge for meat. He imagined that a group of these proto-humans would sneak up on some lions at a kill, make a lot of noise and spear the pride male up the arse. The lions would then scatter in panic, leaving the carcass for the hominids to chop into pieces and carry home to the cooking pot. When he had finished talking, I scratched my neck and gave the following response:

“Leakey,” I declared, “your theory is weak. No weapons fashioned before the Age of Iron would have been effective against the lion, and a pride would not meekly surrender its supper to a gang of upright apes making rude noises. I would also remind you that most lion kills are made at night. Do you really imagine that your ancestors, with their poor night vision, would have dared confront such fearsome predators in the dark? Had they done so, they would have merely added their own flesh to the lions’ feast.”

Leakey ground his teeth and asked me, sardonically, why I thought that humans had evolved their preference for walking on two feet.

“Good question, Leakey!” I replied. “Being upright allowed early humans to peer over the long savannah grass and spot danger from a distance. The erect stance enables a prey animal to carry out evasive manoeuvres in good time to hide from its predators. Your ancestor was not ‘man the hunter’ but ‘man the hunted’. In fact, these hominids were so adept at concealment that many of their hairy cousins doubted whether they actually existed. They were not dissimilar to the mythical fairies and elves in your story books.”

Leakey was not pleased with my explanation and stuck doggedly to his wrong-headed views. Our meeting occurred many years ago, but since then an exhaustive examination of ancient bones and teeth has provided further evidence on these matters. The conclusion is that early man ate very little meat himself, but quite often ended up as the main course for various carnivores that knew how to winkle him out of his hiding places. I see no reason to rub it in by sending Leakey a gloating e-mail.

I still get visits from anthropologists now and again, eager to exchange ideas and test out their theories on me. One of them found a fibrous substance in an excavation site and speculated that it was some sort of herbal remedy used by early humans. He gave me a sample to examine. I sniffed a bit of the stuff and said: “It’s dried elephant dung, my good fellow. I shouldn’t put it in your tea if I were you.” He shrugged his shoulders and returned earnestly to his work.

Comments:
I don't know whethr you get BBC2, GB, but there's programme about Bonobos on this evening.

That wasn't the only thing Leakey was wrong-headed about. For years he helped prop up the corrupt, authoritarian Daniel Arap Moi regime in Kenya.

I was taught in Johannesburg by Prof Philip Tobias, one of the Leakeys' proteges who had the sneaky habit of claiming some of their discoveries as his own. The world of palaeoanthropology is a cutthroat one.

Hang on a minute, GB, didn't you say in one of your early posts that the Masai were great guys because they DID spear lions up the arse? Get your story straight. Either they can be arse-speared or they can't.

I'll ask Dr Whipsnade to record it for me, Kim, but I fear that the only reason for programmes about bonobos is to allow people to watch chimps shagging.

Foot Eater: did you attend the excellent University of the Witswatersrand? If so, did you meet Winnie with her bodyguards?

Tarzan, you goof, the Maasai are modern humans with iron spears. The homonids discussed in this post lived two million years ago.

That Homo Habilis is no oil painting, is he? And why is he twice the size for Leakeypants, with a face four times the surface area? He looks like a satellite dish. Did they communicate by radar or something? No surprise if lions gave them a wide berth, looking like that.

I reckon HH is about to turn around and stick his spear up Leakey's arse. That'd be worth a Discovery Channel special.

GB, yes, I'm a Wits graduate, and I never met Winnie but I was on campus the day she came to speak there in 1987. The riot police arrived and with their usual ineptitude arrested everybody in the sports hall, including a women's aerobics class and a posse of mountaineers high up on the training wall. I escaped lightly, my sinuses refreshed by teargas.

I dunno Ivan. Leakey's friend is better looking than some of bouncers I've seen standing outside Yates's in Romford.

Speaking of evolution, why is it that girl's bums look like peaches? Is it for the same reason that bananas look like dicks?

Maybe you'll condescend to put your simian wisdom to some good use for us curious hairless apes, and explain to us how language and self-consciousness appeared, Monsieur Bananas. A grateful humanity will erect you a statue if you clear that up for us glabrous, skinny relatives of yours.

Jagd, I wrote about the buttocks of the human female here, but we apes should not judge by appearance, unlike Ivan, Beth and SafeT.

Des, I'm delighted to see you've got a blogger profile. Language is fine, but it doesn't solve everything.

I saw Leakey once whilst I was in Tsavo West National Park on a day's safari. I was in a single cab pickup, he was driving some people around in his Landcruiser. We passed each other on a steep, rocky track full of bumps and postholes. He looked rather condescendingly down at us and informed us that we'd get stuck if we tried to go any further. Needless to say we brushed this remark off like it was a harmless midge and spent the next twenty minutes navigating approximately 10 metres of track. But we made it! Hurrah for the humble single cab pickup.

The next time you see him, Dr Joe, send him my regards. There's no need to discuss paleontology or other difficult subjects with him.