Feminism and the female gorilla 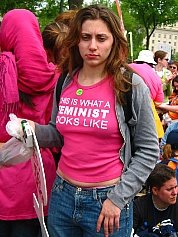 What’s it like being an alpha male with a harem? I won’t deny its good points, but don’t suppose that female gorillas behave like Japanese geisha girls, tip-toeing around the place to satisfy your every whim. These feisty apettes expect the dominant male to earn his position by patrolling the estate and servicing them promptly when they’re in season. What’s more, they outnumber the big guy by a considerable margin and know how to use it to their advantage.

Every so often, the females of a gorilla harem will decide that their hairy sultan has been getting a bit too uppity and needs to be put in his place. Completely without warning, they will jump on him from all sides and use him as a cushion. The male is not harmed as long as he doesn’t resist and accepts his fate passively – otherwise he is liable to get bitten in his tender parts. The females will then eat nuts and gossip until they get bored, at which point the alpha is released and allowed to stretch his sore limbs. It’s a sobering experience for the male, but after it’s over the females are noticeably more relaxed and good humoured. Spending some quality time sitting on Mr Big is a splendid catharsis for them.

Now it’s obvious even to a gorilla that human females have similar feelings towards the male of the species. They want him to be a strong leader, but they also have a powerful desire to knock the stuffing out of him if he gets too arrogant or selfish. Unlike their hairy sisters, however, women have developed an entire science to explain and fulfil this natural urge. They call it “feminism”. The purpose of this discipline is to provide women with an inexhaustible supply of reproaches and taunts that can be used against men in a relentless barrage of invective. The point of interest to a gorilla is whether all this whining actually works. Does it make the woman feel more at ease with herself? Does it bring her satisfaction?

If the feminist cure were indeed effective, one would expect its leading practitioners to be profoundly happy women. Let us take Miss Germaine Greer, author of The Female Eunuch and other feminist tomes, as our case study. Does she strike you as a contented woman? When I put this question to my mentor, Dr Whipsnade, he said not. Indeed, he ventured the opinion that Miss Greer was a less satisfied woman than the nuns of the Holy Order of the Perpetual Chastity Belt. Female gorillas, as I mentioned, are extremely congenial apes once they’ve taken out their frustrations on the alpha male. But feminists? Where is the blissful release of tension from all this incessant nagging? Where is the rapture, I ask?

The mistake that the feminists make is a common human one: the use of language to solve a problem for which it was not designed. What they really want is solid revenge, not windy verbal triumphs. The only purposeful action that feminists ever took was burning their bras – a comically ineffective tactic given that most men are also preoccupied with denuding the female bosom.

I once saw footage of a conference at which Miss Greer was instructing an audience of her irritable sisters. Among the women was a sole male witness called Dave, who listened patiently to the feminist indoctrination until it was time for questions. He then courageously put up his hand and said:

“But I still don’t see what you want!”

The audience booed and barracked Dave as Lady Germaine got to her feet to respond.

“You needn’t worry, Dave,” she declared, “because it sure as hell isn’t you!”

Her brilliant put-down prompted cheers and laughter from her sisters, but had she really answered the question? And did it produce any lasting relief for the assembled sour-faced harpies? Apparently not, for they soon returned to their ill-natured carping. Now if they’d just sat on Dave for half-an-hour, they would have saved themselves and their unlucky spouses many years of mental torment. 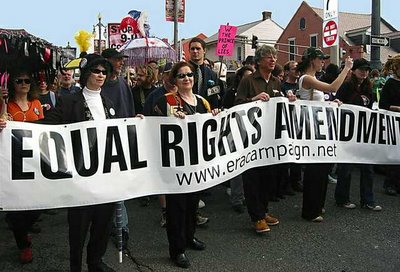 Comments:
Most women I know aren't feminists. My wife certainly isn't. She also sits on me a lot, which I suppose confirms your theory, GB. I quite fancy the sulky one in the top right photo.

I'm confused. You mean that the feminists aren't the hairy sisters?

I sit on my boyfriend every day. When I'm doing it he sometimes says "go easy, you're hurting my nose".

Thanks for reminding me Mr Bananas. That Greer's a right madam.

I was at a charity pub quiz once in Cambridge where Ms Greer was the quizmaster. What struck me most was the way she read out the questions without any reference to anything approaching feminism at all. Such a magnificent show of restraint certainly lifted my opinion of this particular Australian import.

It would have been even more impressive, Dr Joe, if she'd been a humble contestant or maybe even the score-keeper. As the official quizmaster (quizmistress?) maybe she felt that her point had already been made.

Their sourness is somewhat predictable, Monsieur Bananas. People like Dave are usually omega-males; few self-respecting females would derive any enjoyment from sitting on HIM. Now, sitting on Jack Nicholson, that should give feminists some release! (I'm using the phrase entirely metaphorically, mind you!)

I've found that male-sitting is entirely enjoyable, myself ~ being on top has definite advantages all around.. I think it's a win/win situation ~ ;-D

Hairiness is as hairiness does, is what I always say. That handy phrase can be used to effectively end almost any argument, I've found. (And I can be counted on to effectively split any infinitive).

Question. If a hairy woman is hirsute, can a hairy man be said, therefore, to be himsute?

Funny you should mention Jack, Des. I'm pretty sure he had a line to Shirley MacLaine in Term of Endearment like "I've been waiting for you to curtsy on my face..."

Ms Red, I'm sure many men would lie down in front of you in the hope that you'd sit on them.

Aaah, that's it. I thought a himsuit was something ladies with important jobs and puffy ankles wore in the 80s. Live and learn, we live and learn. And then of course we die, so what was the point of all that learning? But much too tired, right now, for trying to answer great cosmic unanswerables. I'll do it tomorrow though, before I take the kids to school.

There is a pink haired wench who calls her self a feminist who is the friend of a friend and is often out while we are out. She is always banging on about being treated equal.
I said I don't want to be treated the same way as a man, I want to be treated like a lady. I like getting flowers, I like doors held open, I like that he books restaurants in his name, I like that he pays for dinner. In turn he likes that I think he should spend most of saturday playing foorball and having a few pints with the lads undisturbed. He likes that I don't keep harping on about equal rights at him every five minutes. He likes it very much that I look nice when we go out, wear heels, and that I don't swear, spit, refuse to shave, or pee standing up.

This makes Pinky very angry. I don't know why.

hehehehe fatmammy ~ well said, WELL said! I concur with fmc ~ lady is as lady does, and being a lady certainly does have advantages!

According to GB's theory, FMC, this pink-haired woman needs to sit on a man pretty damn quick. We just need to find a bloke who'll volunteer to be sat on. I'm spoken for, of course. It might depend on how heavy she is as well.

She's not heavy, but you'd have some job trying to penetrate the miasma of bitter that protects her.
And if you suggest that perhaps she just needs a good 'seeing to' as one of the lads said once, then you would be surprised how vicious these feminists can really get. It was the wrong thing to say of course, but I could see he was trying to be helpful. It is very hard to be angry after an orgasm.

Tarzan, you're being too literal. I find it hard to believe that this woman cannot wooed. The man who told her she needed a "good seeing to" just lacked the required finesse. Of course, she may want to be wooed by another woman, which is a different matter.

The miasma of bitterness... FMC, that's great! I know a few gals like Pinky too, big talkers -- all show and no stay. I'm with you: I like being feminine and being treated like a lady. Maybe Pinky just isn't very good at playing the game...

It is very hard to be angry after an orgasm.

I dunno, FMC, I was fairly livid after I heard my wife having one. With Terry from the local timber yard.

Footie you're just badaboomtishing all over the gaff today.
Say, this Terry doesn't object to pink hair does he?

Yeah, tell us more about this 'Terry', Mr. Foot Eater. I happen to have some, er, lumber that needs yarding. Yeah, that's it! I need a good lumber-yarder. Tell me, is he a blonde or a brunette?

Does he have big feet?

Ladies, please. I don't want to talk about Terry.