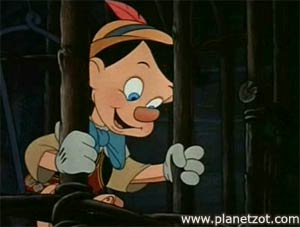 There are not many films that make me emotional, but I confess that I sobbed like a lovesick clown the first time I saw Pinocchio. That little puppet-boy was so terribly touching in his innocent desire to be a human child. Although he is led astray by unsavoury characters – and finds himself in unspeakably hot water for his sins – he learns from his mistakes to return to the blissful pursuits of a normal little boy.

Well, actually, he may not have been normal in all respects. We live in a cynical age, and on leaving the cinema I heard some ill-mannered children singing alternative lyrics to the most charming song in the film:

Their observations may have been anatomically correct, but it’s absolutely not the sort of thing one wants to hear after watching a timeless classic of animated film. Had my wits been sharper, I would have pointed out that a boy with a nose like Pinocchio had no need of a dick. To get an erection simply by telling a fib may be inconvenient for a young human male, but it would save him a small fortune in Viagra tablets in his later years.

The one character in the film that is difficult for a gorilla to take seriously is the chirpy little cricket who acts as the boy’s conscience. I’ve seen millions of insects in my time and never once did it occur to me to ask for their advice on any ethical question. Frankly, they are continually scuttling from one place to another and never seem to pause for reflection, let alone apply their minds to the weightier moral issues of the day. Had Pinocchio been an infant gorilla, that cricket would have lasted about ten seconds before finishing up as a light snack, and no amount of warbling about “giving a little whistle” would have saved him.

Delightful though the story of Pinocchio is, it does raise a serious question. Does the fantasy of creating a child through magic suggest that humans have some deep dissatisfaction with the fruit of their own seed? I sense that many human parents expect their children to appreciate them as their benefactors. If so, they expect too much. No infant will ever accept that it is indebted to anyone for the pure fact of its existence, or even for the sustenance it requires in its early years. A mother may describe the trials of her labour in excruciating detail to her child, but the most likely response she will get is a rather bored resentment. The child, after all, did not ask to be born.

So if you want to be liked by your kids, you’re just going to have to work at your relationships as you might with other humans. Offer them impartial advice, tell them good jokes and take them to the circus. That seemed to work pretty well for most of the humans I knew. And if you are lucky enough to get a magical little boy like Pinocchio, don’t show him any less consideration just because he’s grateful you’ve removed his strings. People who trifle with the feelings of such a pure-hearted cherub are liable to wind up with a big hairy gorilla sitting on their faces.

Comments:
Thanks for the advice on parenting GB. Sound stuff, apart from the bit about offering them 'impartial advice'. Sounds too much like a lawyer to me. If you can't be biased when advising your kids, when can you be biased? I shall continue to advise my sons that cricket is a game for gentlemen and my daughter never to trust a man whose eyebrows meet.

Groan...GB, you are describing my mother and 'all the sacrifices she made for you children..' to a tee. Guilt, the wench is a Jedi Master at it. Fortunately and to her deep resentment, I don't pay her to much heed, but it can get annoying.

GB, a truly inspired post... I ought to make my mother read it -- she loves to play that card as well... maybe this would make her quit with her martyr crap!

It sounds as if you two girls need to be taken to the circus forthwith. If your mothers won't take you, I'm sure Tarzan would volunteer. I'd take you myself if we weren't separated by so many thousands of miles.

That nose of Pinocchio might just come in useful when his girlfriend asks him to go down on her. It might just work if he doesn't sneeze. Count me in for the circus trip, GB.

I cut the strings on a puppet, once, and the ungrateful wretch just lay there wordlessly, flopping around as I prodded it with a puzzled toe. Very disappointing.

And don't get me started on the time I tried to turn a frog into a princess. I hate Disney.

Does that mean you also want to go to the circus, Ivan? Tarzan will have to hire a minibus at this rate.

And on the subject of toe-prodding, why haven't you been trying out your iron-tipped boots on the backside of that nutcase Sol, who's infected Harry's blog?

I have tried during the seven years of being a father to be impartial and fair at all times. I am proud to say that neither of the twins has ever received more attention than the other. Each pat on the back of one is matched by patting the back of his sibling. They beam at me with contentment, and often play duets on the piano to show their appreciation of my fairness.

That's all very well, McCrumble, but you've got to tell them jokes and take them to the circus as well. My internet spies tell me that you really are visiting Uganda. I don't know what you're doing there, but stay away from the wildlife.

As a kid, I always felt bad for Pinocchio because his "Father" never accepted him for what he was, thereby sending him off on his quest to become perfect.

On a Platonic level, however, is Pinocchio merely a shadowy "form" in Plato's cave, seeking the
"universal" of "boy-ness" in the sunlight of the real world?

Or maybe I've been drinking.

Work at your relationships as you might with other humans? What, bribe the buggers to get stuff done, talk about them behind their backs and get paranoid that one day they'll shit on you?

Taking them to the circus might be a better bet, Binty. Tarzan's organising a trip for everyone. Randall sounds as if he would like to come as well.

Who needs a circus trip with a performer like you to entertain us, GB? Just give us some footage of yourself juggling those midgets or whatever your act was.

I liked the Pinocchio film but the acting was a bit wooden.

gorilla antics at my gaff, gb... appreciate your input!