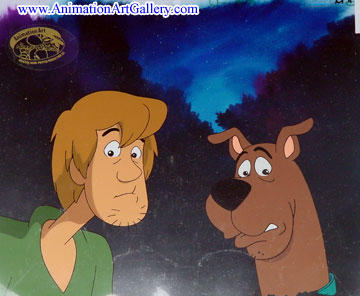 Comments:
You've gone too far this time GB. Shaggy a great human! Because he treats a goofy dog as an equal! On that basis, my neighbour's daughter is a great human because of the way she treats her pet hamster. Get a grip on yourself my good ape!

Tarzan gets a coconut for noticing that the "great humans" eulogised by the learned Mr Bananas may not quite be worthy of the title. Funny how he didn't bother complain about an earlier post in which the "great human" was a woman whose main claim to fame is her shapely breasts. Must have been distracted by the pictures of her, I suppose.

Message to Dr Maroon: I've TWICE tried to post a comment on your blog but on each occasion the haloscan screen went blank and the comment disappeared. I am annoyed about this. I basically said that I was still in class but lacking the energy of your other pupils. That Ms Cat definitely ought to write her own blog. I also said something about jet engines that I have forgotten.

Au contraire, Mynah Bird, I just happened to agree with GB that La Cicciolina was a great human. I'm beginning to notice a hint of misogyny in your comments, old birdie. We don't have a problem with a fairer sex, do we?

Stop squabbling, you two. I've just noticed that Dr Maroon has given me his top blogging award for 2005. OK, he's a jet-engine-maker not a literary critic, but I won't hear a word against him here. I wanted to post a thank-you comment in his blog, but couldn't because haloscan is up the spout.

Putting aside for the moment, the fact that the one with the specs was a lezzer the blond boy with the bandana was a latent homosexualist, and the cheerleader type looked like she’d do a turn on demand, we’re left with Shaggy the dope fiend and the dog that can‘t talk that good. I was almost agreeing with Tarzan when he ruined it by saying he admired that La Cicciolina piece. But we better not go back down that road.

So going back to Shaggy, for all his faults he should be considered a great human.

You don’t think there was anything unnatural about their friendship do you? Apart from speaking to each other of course, but then acid can get you that way sometimes.

Shaggy was a junkie? That's a new angle. He now goes up in my estimation for never selling the pretty girl to the bad guy for dope. The blond boy is a disgrace. He never even tries to kiss her. I don't think he's gay because he doesn't even shag Shaggy. He's just got no balls.

Scooby, as a great Dane, inherits the weaknesses of all Danish.
In the USA, the primary weakness of the Danish is that some of them are filled with cream-cheese while others are chock full of fruit paste.
Greasy to a fault, they are made from similar material to the croissant, but weigh upon your digestive tract as an anchor to a rowboat.
Therefore, I think your analysis is completely wrong, Gorilla. Shaggy has extremely poor taste in companions, and only a poseur would pretend to be a hippy yet wear solid colored shirts.

He's got good taste in Scooby-snacks, though. Have you ever eaten pet food, SafeT?