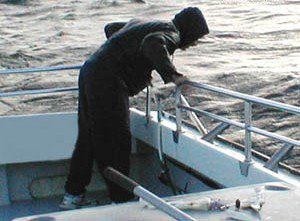 Comments:
Confound your impertinence, you scoundrel of an ape, sir.

I take it from this, that you believe yourself to be the “cunt” to whom Harry Hutton was referring? You’ve got to toughen up. Go on an Outward Bound, you’d love it.

Staying nautical, in rope work there is the cunt-splice, so named because when finished, it looks like a lady’s vaj - if you shut one eye.

Oh NOW I get it.
Why not just tell the cunt to stop fucking swearing?
You're too clever on a Monday for me. Some of us drink at the weekend.

I hope you're not suggesting that women should not talk dirty in bed, GB. That sort of thing has kept the spark alive in many marriages, including my own.

It was actually 'Hell is other people' who was most deservedly called a cunt by Harry. He had implied that Harry had invented his Chinese girlfriend to prove he was a tolerant, non-gay type of person. But I think Harry called someone else a cunt who didn't deserve it. Not me. And telling El B to stop swearing really would be like asking him to chop off his testicles. I was just warning him not to swear at the master of the vessel when travelling by sea.

Does your mate use any especially imaginative or unusual words that
you could tell us about? They must be pretty good ones to keep the steam coming out of your nostrils, you oversexed buffalo.

As usual, our friend Tarzan can be trusted to elevate the discussion to a higher plane. I had thought readers would be interested in whether Bligh really was a misunderstood figure unfairly treated by the film industry. He doesn't sound so bad to me, although I admit that no one has ever called me an 'incompetent mongrel'.

Harry's girlfriend from China.
That's right I remember, and you said a few racist things or, that was it, things that weren't but were construed so to be. And Mynah Bird said we were naked apes and I took exception. Brrrr! testing times, I for one wouldn't want to return to them, but MB was wrong!

Yes we've had our ups and downs, Doctor, but we got through it all without the slap of the glove on the face followed by pistols at dawn, although I still reserve my rights concerning Lord Angus Fartwell if he ever dares to show his face round here again. But as you say, let bygones be bygones and we'll sing auld lang syne.

Sir,due to my lack of education and
poor vocabulary,I hearby reserve the right to use foul,abusive and
offensive language as and when I see fit.Furthermore I refuse to be
lectured at by a hairy bollocks of
an ape.

Hairy bollocks are like having your own built-in egg cosy. Much more comfortable than underpants.

Yes, but hairy bollocks and underpants are like keeping your eggs in two baskets.

Not having any relations with the participants of this particular quarrel with the exception of yourselves and a drawing of what appears to be a drunken weevil I made on a napkin (he has proved to be a formidable and staunch allie of yours, Gorilla) I will only address the content of the post, not the meaning.

While it is not possible for an animal to swear, as far as I know (although Chimps and Bonabos will razberry, stick out tongues, and perform other acts of apparently sincere mockery) it is very possible for some animals to feel shame and embarassment. Since verbal abuse it intended to create the same effect, then perhaps the animal equivalent to a good tongue lashing would be a suitably cruel practical joke.

They copied that from us, Lindy.

Those cheating bastards... I should've known... I'd tell you to bite them back, but that doesn't always work!

An enterprising gorilla with some vines, chipped shale and some spit could rig a nifty decapitational dead-fall.
Won't they be embarassed looking up at their own asses!