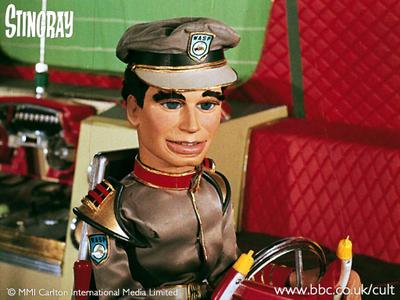 Comments:
Steady on Mr Bananas, Troy and Marina were the Posh and Becks of Supermarionation.
Normal human activity doesn’t stand the comparison and leads to disillusion or should that be dissolution? I have commented on Troy before here , over at Annie’s.

Thanks for the song. I've just listened to it with tears starting in my eyes.
Oh why do we have to get older (and die at some point)?

I'm glad you liked the song, Dr Maroon. When I discovered it freely available I knew it was a nugget of gold to be shared with my readers. Actually, I had thought that Tarzan and the Mynah Bird would be most appreciative, but your linked comment suggests that you were once a devoted fan.
I'll be on the lookout for similar gems from the past.

I never much cared for Marina and I still don't think she deserved that love song at the end (good foraging though, GB!).

I was more of a Lady Penelope man (or boy). Something about those upper class vowels got to me, and made me wonder whether such women also make posh-sounding noises during sex. When I got to University, I met one who did.

You went to university, Tarzan? In the absence of hard evidence, I suppose we might accept your word for it. You clearly didn't learn that bragging about one's sexual conquests is likely to be seen as boorish in refined company.

'Tis a sight to engage me, if anything can,
To muse on the perishing pleasures of man;
Short-lived as we are, our enjoyments, I see,
Have a still shorter date, and die sooner than we.

This comment has been removed by a blog administrator.

Such a handsome face.
Such flappy bottom lips.
Such narrow shoulders.
HOT!

Was not Marina a giant fish from the waist down? I am just wondering if Troy's uncertainty about proposing marriage might have been practical rather than ideological.

I don't think so Annie. Have a look at this picture gallery: she is clearly standing up.
Stingray pictures

I have only just found this one, Mr B, but I have to admit to having had a huge crush on Captain Tempest since I was very small. In fact, as I sit here looking from the Troy pic to Ruf sitting across the room, there is a definite likeness... well, minus the strings obviously :)