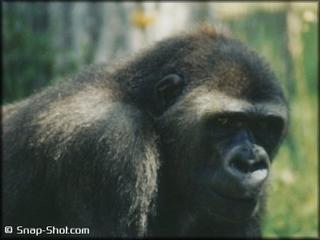 Warmest Greetings to all my naked little primate cousins in cyberspace. Let me introduce myself. I am a mature male gorilla who mis-spent many years of his youth with a travelling circus, performing tricks for your kiddies and pulling rude faces at your grannies. Although the work was as boring as hell, it gave me the chance to observe closely what you big-headed ape-men call “civilization”. Don’t get wrong. I am no enemy of your species and have many human friends whom I visit from time to time. My only wish is to offer you some friendly advice from an outside perspective. Like when you humans pay someone you don’t know to listen to all your personal problems and tell you it’s not your fault because someone groped you when you were a child. Only in this case it’s free. A gorilla with a harem and an unlimited supply of fruit and veg has no need for money.

Now, what is the problem with your lives? Well, it seems to me, my hairless little chums, that you have lost touch with reality. Instead of living, you talk about living, and even talk about people who do nothing but talk about living. A lot of you, for example, spend hours and hours reading story books. Now the stories may be full of action, with fighting, and mating, and fighting about mating. But reading about this stuff is no substitute for actually doing it. If you were really doing what you were reading about, there would be NO NEED to read about it! Reading about it is just a way of imagining you are doing it when you’re not! All this unreality leads to what you humans call the “stress of modern living”. But I call it the “DISTRESS of modern living”. You skulk about with long faces, repressing the universal primate instinct to dance from place to place while shaking your backsides and fondling each other. We hairy apes have an unkind description for you: UPRIGHT AND UPTIGHT.

So the aim of this blog is to help you to unwind and laugh at yourselves. And if my efforts in this direction cause just one of you to loosen up and discover the inner ape struggling to get out, it will all have been worthwhile.

P.S. This blog is being written with the assistance of Dr Larson Whipsnade, my business partner and English tutor.

Comments:
For some reason I read your title as Jap In Gape, thus picturing a Japanese man in a gaping arse hole.

Quite right, reading is dangerous.

Bananas, old boy, you have embarked upon a noble crusade, but I think you are wasting your time. Having spent years with a human family, I have more or less given up trying to wean them from their obsession with trivia. The only way to build bridges is to entertain them with funny voices and let them feed you by hand.

You're preaching to the converted, GB. I'm off to the disco tonight to shake my butt and play the mating game.

BTW, Larson Whipsnade is a notorious bounder. A crook and swindler of the first water. And his doctorate is almost certainly a fake.

Evidently, the picture is not you. Is it a relative? It certainly isn’t a mature male gorilla; maybe a childhood photo?

One from my younger days, when I was a handsome rogue who could break a heart of a young female just by scowling at her. We gorillas can be quite vain.

You really must be quite cultured for an Ape, your prose is excellent. Or perhaps, as the top Ape, you have reams of sub-editors translating your Grunts and Hoograahs into something recognisable as language to us 'Uprights'.

Perhaps one of your sub-editors could translate a copy of Will Self's "Great Apes" for you. You say you're averse to reading, may I suggest the audio book version?

Oops. Wrong end of the blog...

I'd be honoured to be an honorary gorilla, GB. Thanks for calling by to say so.

I love this Blog - It's great to see a human being stringing a few words together, never mind an ape.

I've always dreamt of having a monkey as a pet but wondered what they do when left alone in the house - There's always a chance they'll forget to switch the gas off after making a cup of tea, or try to bathe the dog and drown it.

I find the problem is not that of leaving the gas on, though they do get through a lot of tea, nor is it bathing the dog, because I don't have one. I can even put up with the concomitant damage caused when they swing from the chandeliers, footprints on the ceiling, toppled bookcases, etc,
no. my gripe is the tremendous cost in reams of paper and laser toner cartridges, because the moment I leave the house, they're printing off draft copies of their latest play, or putative novel.
My paper recycling bin is ALWAYS full, and I suspect I'll be getting a visit from the council's Conspicuous Consumption officer.
(His title, by the way is nothing to do with wasteage, as I live in a town once infested with those sad creatures much written about, and painted by the pre-raphaelites, he is employed to be pale, and cough blood, discreetly into a monogrammed hankie)... Oh Yes
He's an official literary critic, I'll be fined if he finds too many clumsy metaphors per page.
And they won't be mine... There is NO defence in English law, to say "The monkey did it".
Thank heavens Gorillas are better educated than their monkey relatives.

Dear GB; just started reading your hairy blog and already have a correction. Your advisor's full name is Larson *E.* Whipsnade - the middle initial makes all the difference.

Thanks for the correction, Argonaut, but Dr Whipsnade would not flash his middle initial in that way. He is British, rather than the American gentleman you appear to have confused him with. I am amazed that people are still commenting on my first post. Fist (above) disappeared without trace a long time ago. I hope those who have commented recently fare better.

Is ``Gorilla'' a first name or a title? I wouldn't want to get this wrong, as one might, if sufficiently ignorant, with a Frenchman calling himself Monsieur Dupont,

It's the name of a species of ape - and thus a title.

But how to abbreviate it? Would "Go." be right?

You address him as Dr. Whipsnade and he calls you merely GB? Thrash the condescending cad.

Humans reading about living, talking about living, or simply living are all doing the same thing. There is no difference between a life apparently lived in fear, in a small safe box, or a life lived full of risk and exuberance and meaningful interaction. Love has many faces. We judge that some ways of life are "bad" and some ways are "good" because we feel there must be a "better" way, that we must be more participatory or start living life now! or be present in the moment or take things less seriously or blah blah blah, blah blah. There is nothing wrong. It's hard to believe, but there isn't. Humans are doing exactly what they should, all of them, all the "time". Including you, spoofing them. You have a good one, and remember the best way to awaken your ass is to get the hell off of it!

happened by this way first time today and glad for it. Funny and interesting read that