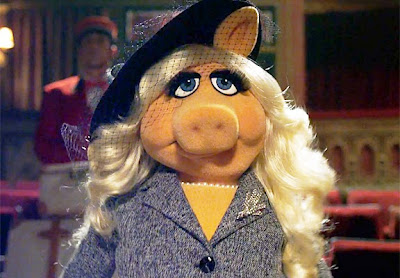 I don’t know whether Miss Piggy deserves the award she recently won for being a feminist trailblazer. Although I’m not quite sure what feminism is, I assume it means more than making shrill noises in an emotional voice. Or does it? The award will be presented by Gloria Steinem, the feminist agitator turned dowager. Is she so different from Miss Piggy when you strip away all the posturing and pontificating? I’ve never met a human who didn’t have an inner muppet struggling to get out.

My friend Kola Boof used to be a feminist, but quit the movement after she was censured for gratuitously exposing her breasts. She now calls herself a “womanist”, which is basically a feminist who thinks that naked breasts are a good thing. Kola is a prolific writer whose books have earned 5-star reviews on the Amazon site. Many have been inspired by her tales of bare-breasted African women who triumph against all the odds. It’s the kind of bedtime reading that has a big effect on your dreams.

Now, snooty critics don’t take Kola seriously because of her exotic name. I find such attitudes unconscionable (a word I recently learned from an American tourist). The mockery of unusual names is a deplorable human habit that has bedevilled talented artists throughout the ages. A recent victim of this insolent behaviour is Ophelia Lovibond, a nubile young actress who has acquired nicknames such as “Ophelia Lovelybum”. She says she doesn’t mind, but it’s obviously not something a feminist would condone. How can you appreciate a woman’s acting skills if you’re constantly thinking about her posterior?

I should state, for the record, that I don’t know anything about Ophelia’s bottom. Very few of her publicity photographs show anything below the waist, and those that do are inconclusive on the point at issue. From the appearance of her face, I would say she’s the type of human female who ought to have a lovely bum, although you can never take these things for granted. I suppose it’s just a matter of time until all is revealed in one of her acting roles, but I’m not going to waste my mental energy by anticipating this auspicious event. May her rump recline in restful obscurity until its hour of fame arrives. 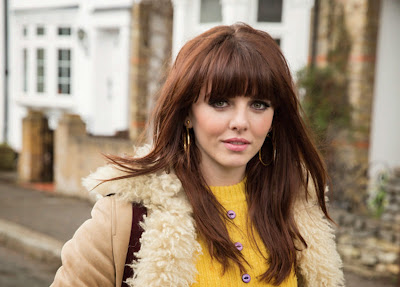 Another actress with an unusual name is Blake Lively, although maybe it’s seen as commonplace in the rarefied circles of Hollywood. Miss Lively recently claimed that her breasts vary in size during the day, requiring her to make frequent changes in apparel. I initially thought this was an apocryphal story to deflect attention from her name by giving people something else to make fun of. But then I realised she might not be joking because she’s currently nursing a baby. All the same, there must be a simpler solution than continually changing clothes to match the transformations of her bust. Aren’t women allowed to pad their bras in this age of feminist emancipation? 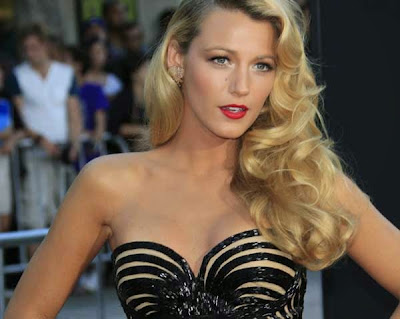 Comments:
I don't wear a bra and I have a fat ass. yet I am not a celebrity. THANK THE DOGS AND CATS!

An unusual name can be both a curse and a blessing. I'm not sure Shia LaBeouf would have impinged even briefly on the world's consciousness if not for his funny name.

Your definition of Steinem = LOL. It's so true! People in my coffee shop looked up from their Facebook feed. I only wish I could share it with them but I'm in a bastion of liberal thought, so I kept it to myself.

Does Ophelia Lovibond (a fictional name, if ever I've heard one) have a British accent? If so, I could really fall for her.

Oh you Shakespearian pundit, you!

They should all become nuns. Bare breasted nuns with silly names. Eccentric and bootyfull.

i fell in love with ophelia at the last waltz and haven't looked back. i asked her to take a load for free but she turned around and put that load right on me.

I think Miss Piggy deserves an award of some kind. She has made my life a bit happier at least. I can understand Blake Lively's claims. I often feel deflated at the end of a hard day as well.

Miss Piggy definitely deserves the award, and Gloia Steinem sounds like she can't wait to unleash her "inner muppet!" I'd say the same about Kermit, but it seems like Miss Piggy keeps him on a tight leash. I won't be surprised if 50 Shades of Pork hits theaters soon!

Her boobs change size over a day? Have they got a leak? I think we should be told.

Anne Marie: Are you blaming the dogs and cats for you not being a celebrity or thanking them for your fat ass?

Steve: It's the only reason I took notice of him, but aren't a lot of people fascinated by his crackpot act?

Exile: Ophelia Lovibond has a cut glass English accent which you can listen to here. You have my permission to kiss her feet.

Jules: Thank you, Jules, the Bard's work is much appreciated in the Congo. We just love watching humans gesticulate and pontificate in funny costumes!
Almost as entertaining as bare-breasted nuns.

Billy: Is that a song lyric, Billy? I'd be quite surprised if waltzing was your thing.

Jimmy: If you lived with Missy Piggy, she could cheer you up after you got home. Would you let her move in if she asked?

Julie: Haha, Julie, that's a great title for a Miss Piggy movie! Who would be brave enough to tie her up, though?

Mrs Table: I believe they are leaking milk, Mrs Table. It's not the kind of leak one can safely plug.

What a brilliant blonde - excusing her abundance of clothing on breast size changes. I think I'll measure my girls every hour today, to see how much shopping I get to do this weekend.

I think Kermit the Frog might have something to say about that.

While you can pad a bra that might make things a little harder if she is nursing. Plus they have pads for nursing bra's because momma tends to leak. lol

I know nothing of brassieres or boobs, but have thought the pig would look better on a spit with an apple in her mouth.

Well, I must be a "womanist," too.
It's that bare breasts thing.

I have an unusual name and I know the struggle. :P

Robyn: Haha, Robyn, that's a great idea! I'm sure your girls deserve to be spoiled for all the good deeds they've done!

Jimmy: Maybe he would, but Miss Piggy would make the final decision. He can't control someone who could squash him.

Mary: How about pumpable pads, Mary? She could pump them up or deflate them to match her boob fluctuations.

Mistress M: Maybe, but who would eat her afterwards?

Al: You could apply to join the club, but you might not pass the physical.

Lux: You are evidently a woman of the world, Miss Lux. And your name is fragrant and clean.

I'm definitely for padded bras and breathtaking cleavage. But does that compensate for no nipples show-through? What a sad loss of seduction weapons!

Good point, Leni. The nipple is a formidable weapon in the fingers of the right hand. :)