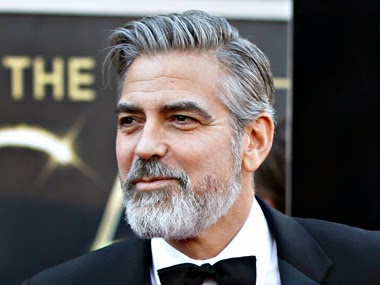 George Clooney thinks he’s getting too old for acting. Silly man! Doesn’t he know that all the best character parts are written for craggy-faced dudes with interesting faces? What George really means is that he’s too old to play leading men who can make women perspire into their panties. This, I regret to say, is the mentality of a vain, strutting peacock. Why would I expect anything better of him? Because we gorillas have lofty ideals which we hope our human cousins will adopt.

Things are not so easy for ageing actresses, of course. Shirley MaClaine played some charming old biddies, but whatever happened to Brigitte Bardot? I can’t remember her in a single role where she didn’t look like a fresh French tart. This must be a worry for Ludivine Sagnier, the aspiring French thespian who’s been hailed as the new Bardot. Her career took off when she took off her clothes in a film called The Swimming Pool – since then, all the Hollywood roles she’s been offered have required nude scenes as a matter of course:

“There is always on the brief written “naked part” or “naked scene”, and I don’t feel like that really connects with what I really am,” she explained.

I know how she feels. All the big screen roles I’m offered involve tree-climbing and chest-thumping. It goes without saying that there are lots of naked pictures of Ms Sagnier in cyberspace, but I’m not going to publish any of them here. When you’ve seen one perfectly-formed human female, you’ve seen them all.

I prefer women who expose their bodies without asking to be paid, usually to make an important statement. A recent example of such is 26-year-old Katarina Jovanovic, a former office worker in Belgrade. She resigned from her job by sending her boss a photograph of her naked body, tastefully obscured by an oilcloth with the Serbian words “I quit” written on it.

“I am not interested in sitting and working for one company until I get old and can retire,” explained Katarina. “It’s a mistake that everybody thinks that a paycheck and money are Man’s only purpose.”

This admirable sentiment makes her nakedness profoundly symbolic and meaningful, which is exactly what nakedness should be. Katarina plans to attend a weaving and pottery class, and is currently spending some time “experimenting”. I send her my best wishes and hope her experiments go well. 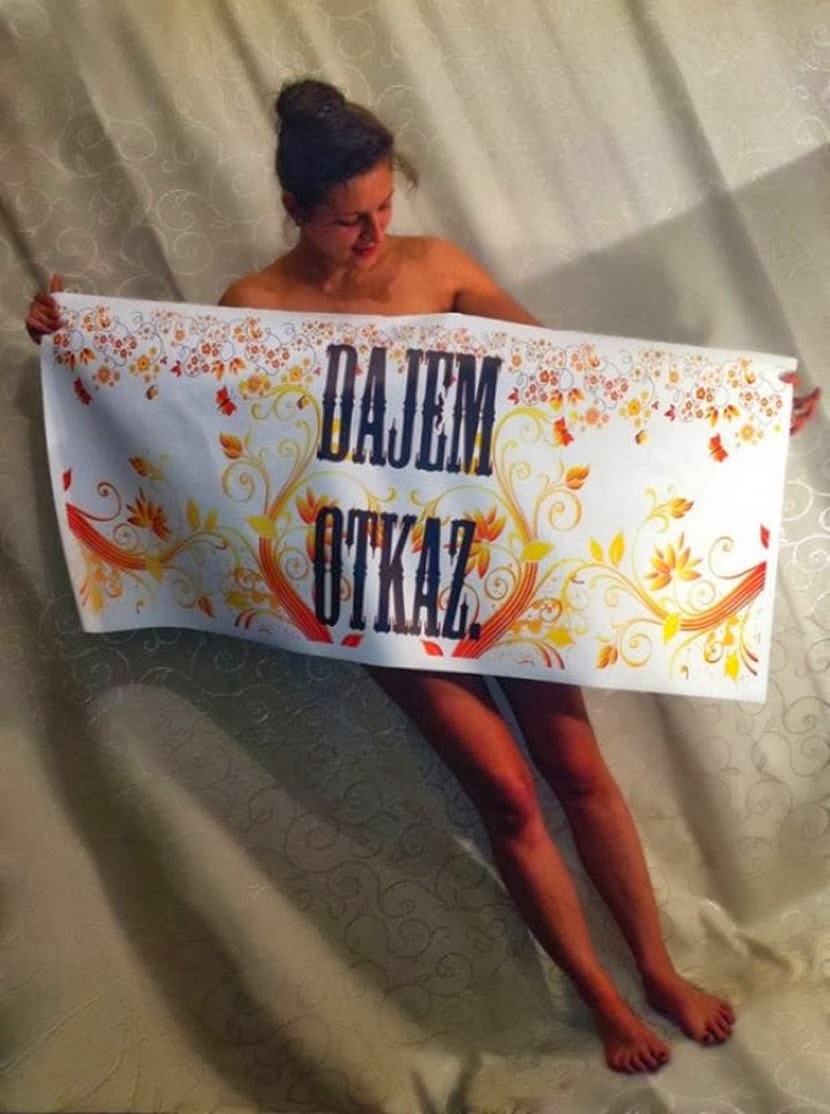 Comments:
Speaking of All Is Lost, the wife and I just watched it, and lemme tell ya, that was a fantastic flick. We were talking about it for days afterwards. The director's commentary helped answer some questions (especially about the ending). A++. Would watch again.

I just watched ALL IS LOST and it kept me on edge. And I KNEW he would be rescued--kept the faith.
Now, as a woman of 61 years of age, I would definitely NOT kick Robert Redford or George Clooney out of my bed! And I also love guys with the shaved head like (be still my heart) Bruce Willis.

That kind of resignation letter could catch on and may have the positive effect of male business owners employing more women in the vain hope that they will all move onto bigger and better things...

Fucking George Clooney. I hate that guy. That's supposed to be my life. Instead I get on a bus at 5:20 a.m. and ride an hour into the city. What the hell HAPPENED?! I quit, too.

Clooney or Cluny? Anyway, he must have played in something I liked but I don't remember what it was. And I wasn't real crazy about most of Redford's movies. I despised The Horse Whisperer but Out of Africa hits either the top 10 or very near.

Gorilla, it seems you are fascinated with naked human bodies. Maybe you relate because you don't wear clothing? I wonder if you enjoy listening to The Streak?

old george got worn out dating stacy keibler. he should have read the warning label before bedding a pro rassler.

Herman Turnip: Yes, I saw it myself. Redford is a better actor now than he's ever been. His face is sadder but wiser.

Rose: Oh dear, Rose, I think your comment contains a massive spoiler! I'm sure you wouldn't kick Redford out of bed - that's no way to treat a senior citizen!

Steve: I hope so - it's a very stylish way of resigning. Have you worked out what the nudity means?

Exile: They say that getting up early becomes easier as you get older, if that's any consolation. And Clooney doesn't have your family life, so maybe he's secretly envious of guys like you.

David: The Streak? Is that the "boogity, boogity" song? I didn't much like its lyrics (apart from "boogity, boogity"), but I liked the funny voice and the country style. Was it popular in the cotton-picking states?

Billy: Ah, yes! That was a brief affair even for George. I hope she gave him the full treatment.

I read so much about these people who up and quit their jobs to live a Bohemian lifestyle. I would like to know exactly how they eat and put a roof over their heads in the meantime. Not all of us can just sh*t cash out our a$$es like George Clooney.

Nakedness.
I like that in a woman.
Actually, I like ME in a woman.
BA DUM BUM
Thank you, thank you very much, I'm here til Thursday. Don't forget your waiters and waitresses. And ladies? Feel free to undress.

Next Rose will tell us the Titanic sank.
At least we got to see Rose's boobies. The Kate Winslet Rose, not the Blogger Rose.
Who may have nice boobies.
I'll never know.

Yes. I'm not sure if women named Ethel was real fond of it but most of us thought it was a hoot.

Many of the women I know are always going gaga over George Clooney's grey hair, and yet when I show them mine own grey (on the head only), they tell me to dye it. What's wrong with human women?

Nude quitting is a terrific idea. You'll never see those people again, so why not show them my Johnson?

I applaud Katarina Jovanović!! Much more creative than sending a standard resignation letter.

Jimmy: Maybe they work as movie extras and sell stuff in flea markets. And I'm sure they grow their own vegetables too. Would you work as a movie extra, Jimmy? You might get to wear some interesting costumes.

Al: Kate Winslet has excellent boobies, but I'm sure she didn't display them in Titanic, which has a 12 rating. Maybe you're thinking of another movie. Or maybe you just imagined them, that's another possibility.

David: I'd feel sorry for a woman called Ethel even if her name wasn't mentioned in the song. Was it popular with churchgoers too? What did Jerry Falwell say about it?

Doctor: It's because he's a movie star, Doctor. Try changing your name to Shashi Kapoor and tell me what happens.

Dr Ken: What if they mail the picture to you mom, Dr Ken? Playing games with your johnson can be dangerous.

Mis Anthropy: I think you could handle JB, Crazy Mama. You've got the mothering experience for it.

Cocaine Princess: It certainly is, Miss Princess! What do you think nudity means in the context of quitting one's job?

Pay me enough, I will wear any costume.

I'm not sure what churchgoers thought as I was grown and no longer forced to go to church.

Actually, I've never watched Falwell, just seen him a couple times when I was switching channels. Who knows? His type justifies whatever they like and demonizes whatever they don't like.

I'm bewildered by the naked quitter. You'd think she's reveal more of herself, were she upset with her employer or wanting to get noticed by Heffner.

I'm not sure what nudity has to do with a job resignation. Frankly it's efficacy as a form of "rebellion" on Ms. Jovanović's part seems paradoxical to me and less provocative in the spirit of rebellion. Was she trying to seduce her boss with what he could have had? Let's see if her own objectification works as intended. She'll probably be able to get another job provided there are plenty of horny males working in human resources. I have other ideas on the subject, but too lengthy to get into here. More power to her I guess. I wouldn't turn down free boobies. But it might have been more effective had she been a man and submitted a full frontal pic. That would guarantee infamy in the professional world--one he'd probably be unable to return to as a result. But that would have been the point, right?

The only fly in the ointment of this plan is the fact that Clooney hasn't got ahit on the wonder that ia Redford. On another jote, I'm going to start making all my annoucments like that woman did - see how uncomfortable I can make my family x

Al Penwasser sent me. George can still make me perspire into my panties, but I prefer Johnny Depp and Ryan Gosling. Since Katarina quit her job, she might not be able to afford clothes sometime very soon.

Jimmy: I hope you'll give a discount for costumes of historical note. There were some great pantaloons in the 18th century.

David: I wish Falwell had been mentioned in the song. Sometimes you've got to poke a snake to make it hiss.

Robyn: Clooney's sister denied he was gay, Robyn. I suspect what George really wants is a man in the body of a woman. As for Katarina, she's wasn't naked enough for Hef to notice.

Static: She didn't show her boobies or crotch, so I don't think she was trying to seduce anyone. I believe it was a statement of her liberation. Some people feel free when they take of their clothes. Nudists, especially.

Scarlett: Go for it, Miss Scarlett! You have my moral support!

Janie: Hello and welcome, Janie! I believe Johnny Depp is having a second adolescence, so I think he'd be glad to hear you mention your panties. As would many others, I'm sure!

I have never thought of George as that good looking.......just saying