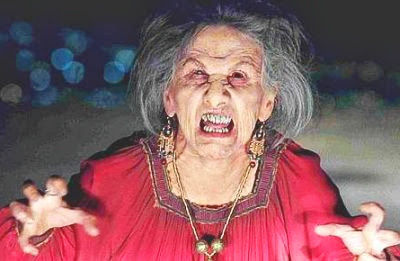 A tourist at the safari camp advises me to consult Madame Poot if I want to know what fate has in store for me in the coming year. In a fit of curiosity, I visit her webpage and discover that she will answer questions on-line, which is unusually obliging for a fortune teller. I consider typing in a question about the price of coconuts when a thought occurs to me: who exactly is Madame Poot? After clicking around the website, I find the following biographical details:

Madame Poot is a very old fortune teller, and very different from all other fortune tellers. While traveling through some ungodly desert, the engine of her pink 1970's Cadillac convertible died due to lack of oil, so there is where she lives today. She's seen many things in her life, most of which she can't really remember.

This story is superficially convincing, but there are obvious holes in it. Those of us who have visited deserts know that surviving there is no picnic. The Kalahari Bushmen can do it, but they have mastered all kinds of cunning tricks, like hunting for roots and squeezing the moisture from lizards. I, for one, would be parched as a cuttlefish in such a habitat, so how could an old French biddy live there without turning into something resembling a dried prune? The suspicion which cannot be suppressed is that Madame Poot is actually a computer program, created, in all probability, by a geeky teenage boy. I hope his mother tells him he’s not too old for a spanking.

To be honest, I don’t have much time for fortune tellers. Our local witch doctor used read my palm for a bottle of fermented mango juice, but most of what he told me was piffle. He eventually confessed to being a fraud when I held him upside down by his ankles. If I consulted a soothsayer today, it would have to be someone like Miss Solitaire in Live and Let Die, played by the nymph-like Jane Seymour.

Miss Solitaire, if you remember, used to work her magic with the tarot cards, which are far more intriguing than a crystal ball. She was also the last film character I can remember who was proud to be a virgin, not least because her powers depended on maintaining the purity of her flesh. Her career ended, of course, when James Bond deflowered her. It was a dishonourable seduction achieved through subterfuge and deceit, and predictably turned her into a pouting nymphomaniac who couldn’t foretell the ending of a Doris Day movie.

If all else fails, you can always use a Ouija board to hail passing spirits and ask them for their prognostications. This is what the clowns did in my circus days, although the spirits they contacted were usually as ignorant of the future as they were. The most famous one they communicated with was Liberace’s mother, who still hadn’t found out that her son was gay. The lesson for overly inquisitive humans is clear: ignorance is bliss. 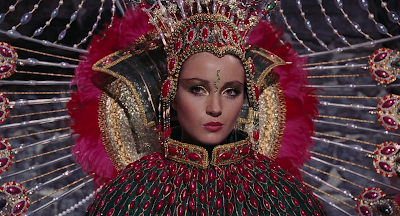 Comments:
Ignorance is bliss and what the eye does not see, the heart does not grieve over. Two maxims for a happy life!

Actually I think Madame Poot does resemble a dried prune. Thing is, I don't see any relation between being old and living in the desert and having the gift of clairvoyance. Do you suppose you can only get it if you are old and dried out?

Given the meaning of poot I would suggest that Madame Poot is nothing but hot air...

after watching the exorcist, i run for the hills at the sight of a ouija board.

It's seem that the spirit of Liberace's mother was also ignorant of the fact that her son was dead and also a spirit. Well, double dumb on her! As for Madame Pogo Stick, as long as her services are free I would be willing to give her a try. What's the worst that could happen?

I'm glad to see you are still sharing your excellent primate musings with the world. If I have not mentioned it before, I shall mention it now: last year I wrote a book based upon the content of a short story I wrote for you some time ago. I recall that after some discourse we concluded you would make an excellent detective. Another of your readers thought along similar lines. Anyway, the book is done and I'm very happy with it. I'm currently trying to find a home for it. None of this would have happened without your good self.

You mention the desert, and instantly I think about the Man In Black from The Dark Tower series. I swear, Stephen King had rotted my brain.

Hippo: I'm sure both maxims have served you well!

David: Being old and living in the desert is what the biblical prophets were, so maybe it does help, if only for PR purposes. I don't know about being dried out, though. Would you rather be dried out or dripping wet?

Steve: Poot has a meaning? I never knew. I'm not sure there's very much air left in her.

Billy: The Exorcist was a damn scary movie, but the evil spirit that possessed the girl was way too badass for a Ouija Board. It would have been insulted by an invitation to play that game.

Jimmy: She might have known he was dead, Jimmy, but what makes you think he would admitted his gayness to her in the spirit world? Will you tell everyone your secrets when you're a spirit?

Mosha: Hello, my dear fellow, how wonderful to hear from you after all this time! Your book sounds fascinating. I wish you would serialise it on your blog!

HermanTurnipp: Is he related to the Man in the Black Pajamas from The Big Lebowksi?

If she really was a fortune teller, she could have foreseen her car needing oil. At least then she could have broken down someplace like Miami or Vegas.

And wait...Liberace was gay??
Huh. Didn't see that coming.

I don't know how it works in the spirit world. I'm Catholic so I could ask the exorcist in my local diocese and get back to you.

I'm a bit skeptical, GB. I mean, a pink Cadillac in the desert would surely have been noticed and rescued by now.

I too have little time for fortune tellers, but Miss Solitaire?...well, she could read my hand any time, or any of my bodily wrinkles for that matter :)

It depends on my state of attire. Clothed - dry. Naked, doesn't matter. Nekkid, wet is good.

I'm pretty sure I saw Madam Poot drinking a can of strongbow outside William Hill yesterday.... x

Al: Hmm, maybe she was headed for Vegas and broke down 10 miles out of town. Liberace put on an act to fool dudes like you so you'd invite him to your hot-tub parties.

Jimmy: You have an exorcist in your diocese? That's scary, man. Aren't you scared of him?

Robyn: I would have rescued her, Robyn, but I'm not sure desert creatures are as altruistic as gorillas.

Joe: Hah, you've certainly got an eye for the ladies! (I can see a picture of your idol on my blog reader).

David: How about wet t-shirt? That's not strictly nekkid, but still!

Scarlett: Did she have a beer belly and a goatee beard, Miss Scarlett?

I don't much care for magic, but it was certainly an interesting element in the Conan novels, comics and movies. I hope your new year is magical!

I'll read your cards for you Gorilla.

Chris: Thanks, and I wish the same for you. I can tolerate magicians who don't pretend to have supernatural powers. I might even find them entertaining.

Mis Anthropy: That's a heck of an offer, Crazy Mama. Will you read my palm too?

I will as long as you're not slappin Miley with it...