Blue is the bluest colour

The manager of the safari camp can’t wait to see the epic French lesbian film that won the Palme d’Or at Cannes.

“I had to sit through Brokeback Mountain with my buttocks clenched because my wife wanted to see it,” he said. “At last there’s a gay picture for the whole family!”

“That all depends on who’s in the family,” I observed. “I doubt it would have much appeal for the dowager aunt or the pet poodle.”

According to Variety magazine, the film has “the most explosively graphic lesbian sex scenes in recent memory”. I hope that doesn’t mean there’s fisting in it. I’ve never liked the practice myself. My old friend Smacker Ramrod, the circus vet, says it reminds him of what he did to help mares give birth. We traditionalists believe that lesbians should stick to good old-fashioned carpet-munching and leave the more invasive procedures to the gynaecologist. Imagine having to call emergency services if someone’s hand got stuck in your birth canal. It’s not the sort of condition on which ambulance crews receive in-depth training.

A lot of women can’t fathom why men enjoy watching lesbian sex scenes, given that there’s no obvious role for them in the action. It’s a question that’s puzzled me too. Perhaps they imagine themselves doing a similar job to the referee in a boxing match, shouting out instructions, keeping score and breaking up clinches. I should imagine it would be easier than refereeing a real fight, where the contestants must abide by the Queensbury rules. There’s no need to penalise low blows in a Sapphic encounter.

No post about lesbians would be complete without discussing the latest exploits of Ellen Degeneres, who has recently acquired a $26.5 million mansion with her wife Portia di Rossi. Have you noticed how Ellen always wears men’s clothes when the couple appear in public? And that Portia is always referred to as her wife (and never vice versa)? This is Ellen’s way of telling us that she is the nominal husband in the relationship, which avoids the linguistic anomaly of having two wives in a marriage.

Maybe the opposition to gay marriage would be less strident if all gay couples adopted this convention, so that marriage remained a union between a husband and a wife. This would be easy to achieve for two men, when it’s normally pretty obvious who the wife is (e.g. Elton John in his marriage with David Furnish). Unfortunately, matters are rarely so clear-cut in a lesbian relationship. I really have no idea how they decide who wears the trousers.

Before you accuse me of being a nosey ape, I fully acknowledge that it’s none of my business how lesbians sort out their titular arrangements. That doesn’t stop me from wanting to know, of course. If any lesbian would like to let me in on the secret, she should send me a discreet email, which I would treat in the strictest confidence. Gorilla Bananas can be trusted not to spill the beans. 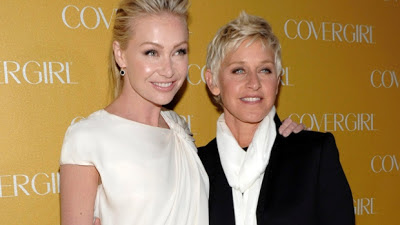 Comments:
Men enjoy watching 2 lesbians for the simple reason their visual stimuli are doubled. It is voyeurism to the power 2.

Buttocks clenched?
Did you have a hard seat?

Ellen and Portia are my favorite lesbian couple.

i've long suspected that ellen and anderson cooper are the same person.

I think men enjoy watching lesbians so they can get pointers.

I don't even wanna watch me having sex.

I have nothing against Ellen and her lifestyle choices. As long as she never hosts the Oscars again I can die a happy man. Heh.

Lesbians eh? Several of them working in the stables and do you know what? The horses aren't frightened by them at all.

A certain in-law of mine - when she was talking to me - was always fond of asking and re-asking who the man was in my relationship. I always gently explained that unlike her own marriage, there were two men involved - not one man and a harpie.

Steve: That sounds rather simplistic to me. Camille Paglia said lesbians were like a bath of female flesh, but a bath is only appealing if you can get into it.

John: I believe the cause of the clenched buttocks was mental rather than physical.

Robyn: They do make a lovely couple, Robyn, although Jodie Foster and her spouse might look even better if they were photographed together.

Lost Jimmy: Ah, that must have been a 'Dykes on Bikes' meeting! You were lucky to be allowed there as a voyeur.

Jimmy: She probably hires a man to carry out those tasks, Jimmy. I'm sure she's capable of doing some of them herself, but why should she bother with her riches? Playing dress-up is part of the LGTB scene, so I doubt she'd consider it demeaning.

Billy: There is a resemblance, although Ellen might be the more manly one.

Keeping it real: That would be the best reason for watching them. There's nothing a woman can do to a woman that a man can't do to a woman. Correct me if I'm wrong.

Crazy Mama: Wouldn't you like to try it once with mirrors on the ceiling, Crazy Mama?

Herman Turnip: Fortunately, I didn't see her in that role. Did her jokes fall flat?

Sir Hutson: What a cheeky thing for an in-law to say! And your riposte was a tad misogynistic in my opinion. Have you taken any pictures of your lesbian stable girls?

Sarcastic Ninja: Maybe it was acceptable because it was written in English, so only the bilingual knew what it meant. I'm sure a similar sign in Japanese would not raise an eyebrow in the British Isles.

My younger, straight girlfriends seem to have all experiemented with another girl. If a good man doesn't step up soon I may have to consider calling Portia to see what it is all about. I will report back.

I would totally go lesbian for Portia de Rossi.. xx

Fisting..hmm.. it's very James Herriot isn't it? I wonder of the benefits. It must be like giving birth backwards. I really don't wish to stay on this point.

I can't believe Ms Degenerate earns that much moolah. Just for chatting? I could do that. Couldn't I?

I caught up with a friend of mine recently who told me he had just bought a delightful house that only came onto the market as a result of a divorce. Apparently the husband lost it when he came home unexpectedly and discovered his wife in bed with another woman.

The man was clearly deranged. Think about it. If she was shagging another man, you as the cuckold, would be honour bound to fight him and, let's face it, if wives are going to kick over the traces, they hardly trade down so the chances of getting a good kicking from a younger, fitter man are very high. Whereas, if she is upstairs making love to another woman, she isn't going to be impregnated with another man's seed, you'll be able to choose the TV channel and she'll probably be delighted if you spend a few extra hours in the pub.

I find all graphic lesbian sex scenes to be explosive. No need for the distinction here.

Why'd they call him Smakcer? Is that his birth name or a nickname? I'm hoping the latter. Does it have anything to do with that third label below?

I was hoping The Great Gatsby would have won Palme d'Or.

Brenda: There's nothing to stop you experimenting with a woman while you're looking for a man. Do everything together and compare notes.

Scartlett: I'm glad to hear it, Ms Scarlett! She is justly famed for her androgynous appeal.

Hippo: What a fool! He should have tried to engineer a ménage à trois. A man is entirely within his rights to sleep with his wife's lesbian lover.

Mr UB: Smacker is a nickname he acquired from his habit of smacking animals on the rump. I hope you'll see the film and post a review. It sounds right up your alley.

Crazy Mama: Are you sure? It might keep you entertained.

Cocaine Princess: Is it possible to nuzzle more than two boobs at a time? Four boobs might make it difficult to choose.

Sorry about that. I was distracted by the lesbian action... Watching lesbian sex is like the ultimate pleasure for lazy men like myself.

P.S. It pleases me to hear you're a traditionals. It does make me wonder, though, what I should call myself.

I'd love to be the wife of Ellen :p

Al: Well, let's not get carried away. There are also lesbians in non-titular positions.

Blue Grumpster: Yes, I suppose watching lesbians doesn't require much effort. Perhaps you should call yourself a Sapphist.

The Blue Sapphist.... Do I get to keep the rubber boots and matching whip?